West Hollywood, now dubbed the Emerald Village to lure more cannabis tourism, is currently home to one operating cannabis consumption lounge, with more than a dozen on the way. One of those coming soon is at The Woods Weho, a dispensary backed by Woody Harrelson and Bill Maher that opened last weekend. 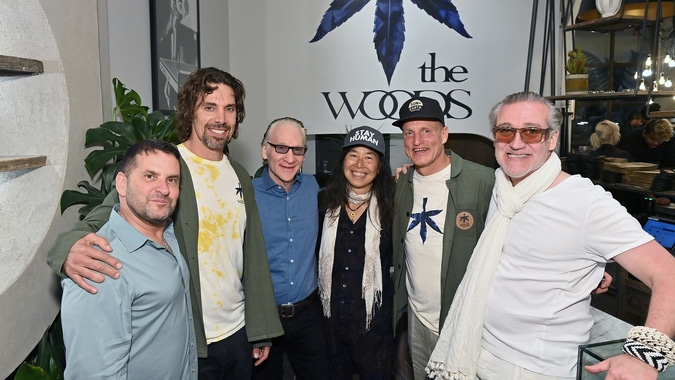 Harrelson, sided by the mayor of West Hollywood and the head of the city’s chamber of commerce, proudly cut the ribbon at his new business venture. “Hopefully we’ve added more beauty and more good times here. Hopefully, we can make the West Hollywood Citizens a little bit higher,” Harrelson told the crowd. “It’s the greatest day that I’ve had in a long time.”

He said he fell in love with the building, a former designer’s studio with beamed-ceilings, dangling lights, and beautiful arched display cases, both for its location and garden in the back. The garden, complete with koi pond, is where customers will be able to light up once it opens. For now, the dispensary carries a variety of cannabis brands but emphasizes organic, sun-grown strains from California — his personal favorite.

After 40 Years, Cheech and Chong Are Still Rolling

These Cannabis-Infused Cocktail Recipes Are Worth a High Five