On May 7, residents of Denver, Colorado, voted to decriminalize the use and possession of “magic mushrooms.” Oakland, California, followed suit on June 5. Oregon will vote on it in 2020. Does America really know what it’s getting into?

SALT LAKE CITY — On an early morning in July 2013, Octavian Mihai walked into a room in the New York University School of Medicine. Soft music was playing. He was greeted by two trained therapists who, after several prior sessions with him, had said his anxiety was “off the charts.”

Mihai was there to take “magic mushrooms.”

He was part of a clinical trial testing whether psilocybin, the psychedelic compound produced by a group of mushrooms, might be an effective treatment for cancer patients with severe anxiety and depression.

The therapists brought Mihai a synthetic psilocybin pill. Before taking it, Mihai joined hands with the therapists and set an intention for the eight-hour “trip” he was about to embark on: Eradicate his anxiety.

He swallowed the pill, laid down on the couch, slipped on a pair of headphones to listen to music. He flipped through a book containing images of mountains and peaceful landscapes. Eventually, he put eyeshades over his eyes. He didn’t feel much of anything for the first 45 minutes. 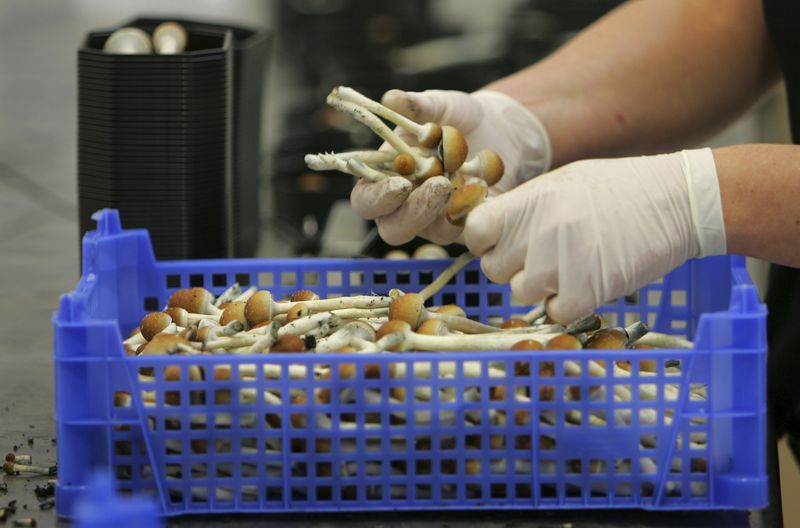 Psilocybin mushrooms are being weighed and packaged at the Procare farm in Hazerswoude, central Netherlands in this Aug. 3, 2007, file photo. Psilocybin could be approved by the FDA, and therefore become a legal drug with medicinal purposes, as early as 2023.  Peter Dejong, Associated Press

And then he felt like he was floating above his own body.

He saw himself lying prone on a stretcher in the entrance of the New York hospital where he had recently undergone chemotherapy. Diagnosed with stage three Hodgkin’s lymphoma cancer at age 21, the disease had invaded every part of his body except for his bone marrow. As he watched, black smoke suddenly began to pour out of him.

Mihai understood that the black smoke represented the cancer leaving his body. Technically, he had been cured of the disease in May 2013, within six months of his diagnosis, but he had been plagued ever since by debilitating anxiety that the cancer would return. This resulted in him obsessively touching his lymph nodes, trying to detect cancerous lumps. Now, two months after his remission, Mihai swooped in closer to his body and examined his lymph nodes. The fluid within them was clear.

US Alcohol Consumption Falling as Cannabis Use Increases